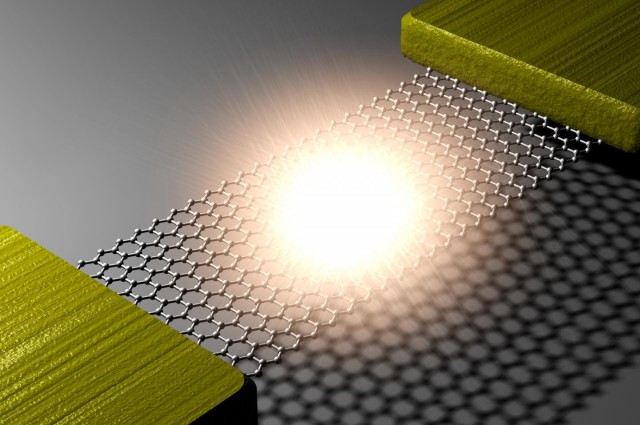 While researchers have managed to fit many different devices onto tiny computer chips, it has been an ongoing struggle to achieve the same feat for the light bulb. However , it seems they have finally manged it. The reason light bulb never previously featured on computer chips is because they need to reach thousands of degrees Celsius to emit light. These temperatures, while producing light, damage the surrounding chip.

How have researchers overcome this?

By using an amazing material that has permeated our lives: graphene. As described in Nature Nanotechnology, scientists have created an atomically thin graphene filament that is integrated with a computer chip. When an electric creent runs through the filament, it heats up enough to emit light.

So why has not the graphene melted the chip like a filament bulb would?

It turns out it’s  because graphene has an interesting property:  when it heats up, it becomes a poor conductor of heat, Thus, the heat is creates is confined to the filament and does not melt the surrounding chip.

The light bulb happens to be the thinnest in the world at only one atomic layer thick. You can see how tiny it is in the photo.

Working in the microscale comes with its own set of unique challenges. Young Duck Kim explains :” It is impossible to distinguish a material that is only a single atom in thickness by the naked eye. Handling and working with atomically thin materials is not trivial and requires many special techniques.”

Young Duck Kim explains how the light solves a few pesky problems that have been plaguing companies like Intel, whose state-of-the-art light sources are not even integrated into computer chips. Additionally, their lights use ecpensive and complicated connections. This graphene light, pon the other hand, is low cost with a relatively simple structure.

Do this mean you can expect to see graphene lights in your house any time soon ?

“First, we can easily make flexible and transparent graphene lighting, which we can attach to the window and wall,”

“And,  what is even more exciting, is that we can use graphene light to develop flexible and transparent smartphone and tablets. Graphene light will transform the chips in our computers and smzrtphones, so that they can process information with light, which mean it will be faster, in a more compact form, and with less energy consumption. This could happen very soon!”Kim said.

But more question: Is this safe?