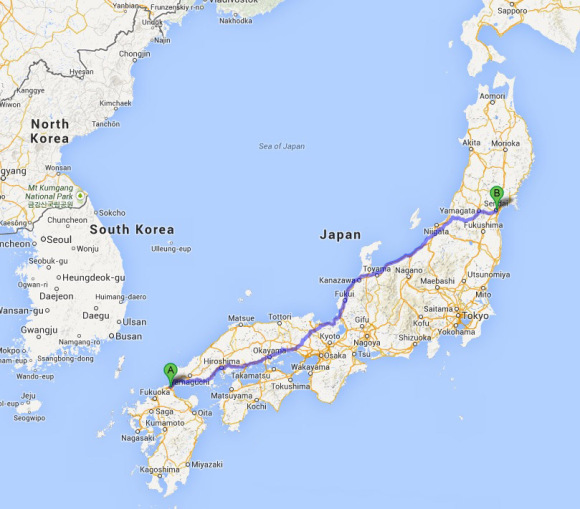 The mother of a 25-year-old man was stunned to see him arrive home after he was declared missing for several days. When she last saw him he left his hometown of Sendai to attend a national trading card game competition in Kitakyushu city on 23 August.

However, when he never made his return flight on 25 August, she got worried. It turned out that her son was robbed of his wallet and mobile phone and spent the following 11 days traveling back to Sendai on foot. Upon his return the son said, “I never wanted to make a fuss. I’m sorry to everyone I inconvenienced.”

After the card game meeting ended, he was too late to catch his flight back to Sendai. Without a way back, he took to the streets so he could find an internet café to spend the night in. As he was searching, he was approached by another man who demanded, “hand over your phone and wallet.” The son complied and the man ran off with the items. Luckily, the son had kept an extra 2,000 yen (US$20) tucked in his shoe.

At this point most people would go to the police or maybe use the money to call home. This man did neither and proceeded to walk back home himself. “I used the 2,000 yen I had hidden in my shoe and bought bread and water to fight off hunger,” he said.

Eleven days and 1,400km (870 miles) later, the deeply tanned son arrived on his doorstep to a stunned mother on 5 September. Her first thoughts at the sight of her lost son: “I was shocked and I thought I saw a ghost. I’m really thrilled he’s back, and I’m very sorry to everyone who was worried.”

When the news broke, netizens spoke up as one and asked, “Why the hell didn’t he contact anyone?!” We can only assume that either he truly didn’t want to bother anyone (including the police who are paid to be bothered in such cases), or perhaps he was up to something else that he didn’t want the police or family catching wind of.

Either way, he’s home safe and it’s a happy (albeit weird) ending. As an added bonus he was able to hold on to a very important trading card in his collection throughout the mugging and journey, and in the end that’s what really matters, isn’t it?