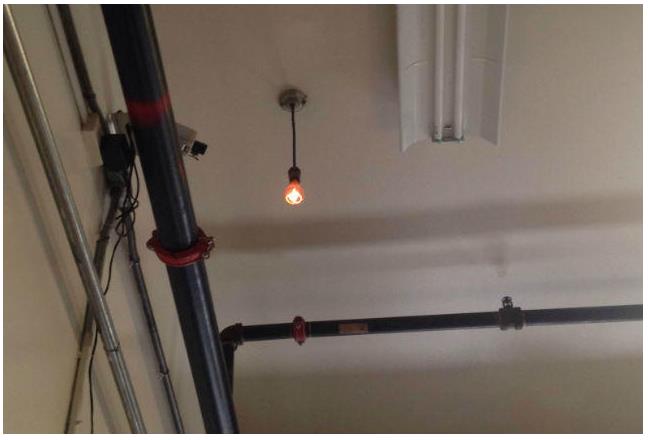 There is a light bulb in Livermore, California that won’t go out.

It hangs on a cord from the ceiling of the Livermore, Pleasanton Fire Department’s Fire Station #6, and it has been burning since 1901, on June 27. There was a party held in the bulb’s honor to celebrate its one millionth hour of operation. There were refreshments and music and barbecue. Town officials toasted the bulb’s achievement. The light bulb, for its part, burned over everyone’s heads, like it always does.

About an hour east of San Francisco, Livermore sits in a valley surrounded by rolling hills made gold by the drought. The fire station is on East Avenue, and bulb tourists like myself must walk around back and ring the doorbell to get let in. Inside, fire engines and equipment dominate the space. The small bulb hangs about twenty feet overhead, glowing near a row of fluorescent shop lights which, unlike the bulb, were turned off. If it weren’t for the camera pointed directly at it (to broadcast a live web stream), the bulb would be easy to miss.

To be an on-duty firefighter at Livermore-Pleasanton Fire Station #6 means you have to both fight fires and give historical light bulb tours at a moment’s notice. The two firemen who hosted me said I was the second visitor of the day. Some days they have huge groups who come in—groups that have been known to bunch beneath the bulb and gawk crane-necked at it until the firemen get an emergency call. They then have to politely shoo the tourists outside while they gear up to leave the station, sirens blaring. These visitors will sometimes still be standing outside when the firefighters return, waiting to get let back in to look at the bulb some more.

Filament: Carbon, made by a “secret process” that is still unknown today. The filament forms a loop inside the bulb that, from below, looks like the word “no” written in cursive.

Wattage: The bulb is thought to be a 60-watt model (actual figure unknown), but it currently burns at about four watts.

Much of this info (and the information that follows) is from A Million Hours of Service, a book about the bulb written by Thomas Bramell, Livermore’s retired Deputy Fire Chief and foremost historian of the bulb. It is for sale at the fire station, along with bulb T-shirts and other bulb memorabilia. (Proceeds go to the Livermore-Pleasanton Firefighters Foundation, a non-profit that supports injured and fallen firefighters, the burn foundation, and other charities.)

BRIEF HISTORY OF THE BULB AS *THE BULB* The bulb had been burning without much fanfare for 71 years before Mike Dunstan, a reporter for the Livermore Herald and News, starting asking around about it in 1972. Through interviews, Dunstan was able to confirm the bulb’s longevity.

The bulb was likely given to the fire department in 1901 as a gift from local businessman Dennis F. Bernal. One of Bernal’s children recalled to Dunstan that her father had given away a stash of business and personal items in 1901 and that this stash probably included the bulb. Older residents remembered passing the fire station and seeing the bulb during walks to and from school in the early 1900s. John Jensen, a former volunteer firefighter who served in Livermore in 1905, said he recalled the light being on at all times as far back as he can remember. Because it worked as a sort of emergency light to help firefighters see at any time of the day, the bulb was never turned off.

The light has been burning so continuously, the few instances when it has been turned off can be printed on a small bookmark:

1906: The bulb was moved from a fire house on Second Street in Livermore to a new fire station on First Street.

1937: The bulb was turned off for about a week when the station underwent renovations that were part of a WPA project.

1976: The bulb was moved to the newly built Fire Station #6. It was off for about 22 minutes during that move, plus a few seconds after it was installed and wouldn’t work. (City electrician Frank Moul slightly rotated the bulb’s socket switch, rectifying the problem.)

May 20, 2013: The bulb went out in the early morning hours when its uninterrupted power supply malfunctioned. A man in Australia watching on the bulb web cam noticed the outage and frantically tried to get in touch with the fire station from the other side of the Pacific Ocean. The bulb wound up being off for about nine hours.

To fix it, firefighters bypassed the uninterrupted power supply with an extension cord. Worryingly, it burned about four times as bright as normal when it was turned back on, raising fears that it was about to surge out. Over the next few days, however, it returned to its normal brightness level, which is to say about as bright as an overzealous nightlight.

THREE THEORIES ON WHY THE BULB HASN’T BURNT OUT

1: Consistency: Matt, one of the firefighters who showed me the bulb, tossed out this theory (which he identified as “a theory,” meaning that it is in no way definitive). As described above, the bulb has been turned off and on so infrequently that the filament has burned at a steady rate without having to cool down and heat back up repeatedly. This results in a sort of “thermal momentum.” (“Thermal momentum” is my phrase, and I thought it sounded super smart when I said it during Matt’s explanation and am including here for posterity, hoping it gets reprinted in further reports about the bulb, granting me a slice of the bulb’s immortality).

2. It’s just one of those things: Joel, the other firefighter present during my visit, added to the previous theory by calling the whole thing a “perfect accident” (which I concede is a much better phrase than my “thermal momentum” mumbo jumbo—mumbo jumbo, it turns out, that is already a term in the physics community and not a term coined by yours truly; thus my immortality burns out). “The Shelby bulbs are hand-blown,” he explained, and the uniqueness of its shape, size, filament, and other factors that can’t be achieved during mass production all contribute to this “perfect accident.”

3. Planned Obsolescence: On December 23, 1924, executives from the world’s major light bulb manufacturers met in Geneva to hatch a plan. GE, Philips, Tokyo Electric, Germany’s Osram, France’s Compagnie des Lampes, and others joined together to form what is known as the Phoebus Cartel. The cartel divided the world into market zones they would individually control and instituted sales quotas to keep each company equally dominant. They also decided to limit their lightbulbs’ average operating lives to 1,000 hours, about half the number of hours the companies’ existing bulbs were capable to burn.

“The cartel took its business of shortening the lifetime of bulbs every bit as seriously as earlier researchers had approached their job of lengthening it,” writes Markus Krajewski in the trade magazine for the Institute of Electrical and Electronics Engineers. “Each factory bound by the cartel agreement—and there were hundreds, including GE’s numerous licensees throughout the world—had to regularly send samples of its bulbs to a central testing laboratory in Switzerland. There, the bulbs were thoroughly vetted against cartel standards.”

The cartel unraveled by the 1930s, partly due to government intervention and fair trade legislation, and also because smaller competitors were able to disrupt the manufacturing giants by selling cheaper bulbs.

While the cartel’s shelf life was as short as the bulbs they produced, its legacy has lasted much longer. Accusations of planned obsolescence are routinely pointed at companies nowadays, and every time someone’s smartphone breaks after its warranty runs out, the ensuing complaints (justified or not) have their roots in the Phoebus Cartel’s scheme.

If this all sounds like the plot of a paranoid novel, it’s because it is. Thomas Pynchon wrote about the Phoebus Cartel in Gravity’s Rainbow. They appear in a section about “Byron the Bulb,” a plucky talking light bulb who never burns out and becomes a target of the the cartel. While Pynchon was obviously writing fiction here—lights bulbs don’t talk, not even famous ones hanging in California fire stations—the Phoebus Cartel was very much real.

Seeing as Gravity’s Rainbow was published in 1973, it’s possible that Pynchon, who lived in California, had read Dustan’s coverage of the fire house bulb in the Livermore Herald and News and used it as inspiration for Byron the Bulb (he’d have to have quickly put it in the book he had been working on for years, though).

Either way, the centennial bulb has become a smoking gun of sorts for people who believe that companies still conspire to shorten products’ operating lives for profit. It was featured in the 2010 documentary The Lightbulb Conspiracy, and a British film crew traveled all the way to Livermore to film the bulb, glowing away in humble glory.

No matter how well-made those pre-Phoebus bulbs are, 114 years is still a ghastly overachievement for Livermore’s little light.

When I asked the on-duty firefighters about the theory of planned obsolescence, they shrugged and were democratically noncommittal as to whether or not their station’s nightlight pointed to a global conspiracy. WHAT HAPPENS WHEN/IF IT BURNS OUT?

After that close call in 2013 when it was off for nine hours, the keepers of the bulb saw its life flash before their eyes. Should the centennial bulb burn out for good, they don’t want to be without a strategy for saying goodbye to it with dignity. While nothing is official yet, they want to have a full funeral procession through town, finishing at the historical society where the bulb will be displayed in a resting place of honor.

If you show up and quietly do your job without fuss for long enough, there’s a chance you’ll be celebrated like a head of state when you die.

Murmurs of a replacement bulb also abound. A supposedly unused Shelby model just like the current centennial bulb has been acquired by a party who may be willing to part with it when the time comes. Keep in mind, these plans all hinge on the bulb actually burning out, something that hasn’t happened for 114 years.

Don’t be surprised if it buries us all. Long live the bulb.