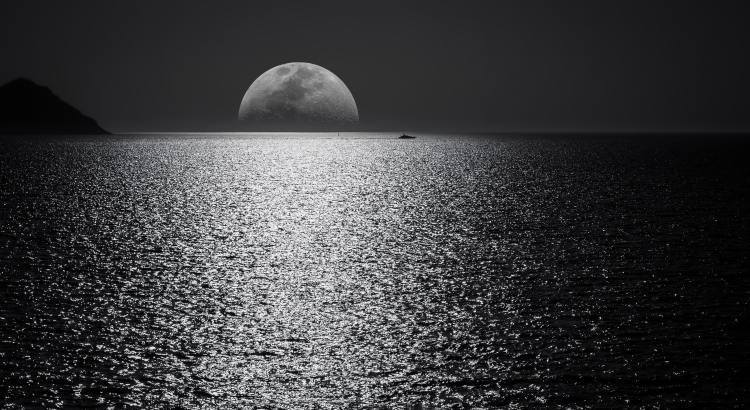 He stood staring at the water. Then he stooped and picked up a stone, which he threw sharply at the pond. Ursula was aware of the bright moon leaping and swaying, all distorted, in her eyes. It seemed to shoot out arms of fire like a cuttle-fish, like a luminous polyp, palpitating strongly before her.

And his shadow on the border of the pond, was watching for a few moments, then he stooped and groped on the ground. Then again there was a burst of sound, and a burst of brilliant light, the moon had exploded on the water, and was flying asunder in flakes of white and dangerous fire. Rapidly, like white birds, the fires all broken rose across the pond, fleeing in clamorous confusion, battling with the flock of dark waves that were forcing their way in. The furthest waves of light, fleeing out, seemed to be clamouring against the shore for escape, the waves of darkness came in heavily, running under towards the centre. But at the centre, the heart of all, was still a vivid, incandescent quivering of a white moon not quite destroyed, a white body of fire writhing and striving and not even now broken open, not yet violated. It seemed to be drawing itself together with strange, violent pangs, in blind effort. It was getting stronger, it was re-asserting itself, the inviolable moon. And the rays were hastening in in thin lines of light, to return to the strengthened moon, that shook upon the water in triumphant reassumption.

Birkin stood and watched, motionless, till the pond was almost calm, the moon was almost serene. Then, satisfied of so much, he looked for more stones. She felt his invisible tenacity. And in a moment again, the broken lights scattered in explosion over her face, dazzling her; and then, almost immediately, came the second shot. The moon leapt up white and burst through the air. Darts of bright light shot asunder, darkness swept over the centre. There was no moon, only a battlefield of broken lights and shadows, running close together. Shadows, dark and heavy, struck again and again across the place where the heart of the moon had been, obliterating it altogether. The white fragments pulsed up and down, and could not find where to go, apart and brilliant on the water like the petals of a rose that a wind has blown far and wide.

Yet again, they were flickering their way to the centre, finding the path blindly, enviously. And again, all was still, as Birkin and Ursula watched. The waters were loud on the shore. He saw the moon regathering itself insidiously, saw the heart of the rose intertwining vigorously and blindly, calling back the scattered fragments, winning home the fragments, in a pulse and in effort of return.

And he was not satisfied. Like a madness, he must go on. He got large stones, and threw them, one after the other, at the white-burning centre of the moon, till there was nothing but a rocking of hollow noise, and a pond surged up, no moon any more, only a few broken flakes tangled and glittering broadcast in the darkness, without aim or meaning, a darkened confusion, like a black and white kaleidoscope tossed at random. The hollow night was rocking and crashing with noise, and from the sluice came sharp, regular flashes of sound. Flakes of light appeared here and there, glittering tormented among the shadows, far off, in strange places; among the dripping shadow of the willow on the island. Birkin stood and listened and was satisfied.

Ursula was dazed, her mind was all gone. She felt she had fallen to the ground and was spilled out, like water on the earth. Motionless and spent she remained in the gloom. Though even now she was aware, unseeing, that in the darkness was a little tumult of ebbing flakes of light, a cluster dancing secretly in a round, twining and coming steadily together. They were gathering a heart again, they were coming once more into being. Gradually the fragments caught together re-united, heaving, rocking, dancing, falling back as in panic, but working their way home again persistently, making semblance of fleeing away when they had advanced, but always flickering nearer, a little closer to the mark, the cluster growing mysteriously larger and brighter, as gleam after gleam fell in with the whole, until a ragged rose, a distorted, frayed moon was shaking upon the waters again, re-asserted, renewed, trying to recover from its convulsion, to get over the disfigurement and the agitation, to be whole and composed, at peace.

Birkin lingered vaguely by the water. Ursula was afraid that he would stone the moon again. She slipped from her seat and went down to him, saying:

“You won’t throw stones at it any more, will you?”

“How long have you been there?”

“All the time. You won’t throw any more stones, will you?”

“I wanted to see if I could make it be quite gone off the pond,” he said.