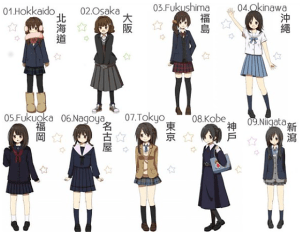 According to the artist, Tokyo and Niigata compete for the shortest skirt of all.

Japanese high school uniforms are so entrenched in anime and manga culture they’ve become almost as well-known as the characters who wear them. While the blue-and-white sailor suit-style outfit has become a fixture of countless storylines, in reality there’s a huge number of variations on the type of skirts, shirts, jackets, coats, neckties and accessories that a student might wear. Even a girl’s socks can reveal details about local trends and the area in which she lives. 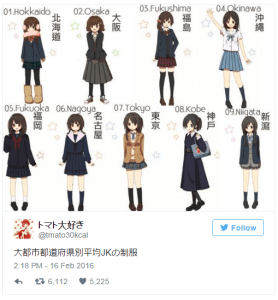 Dressed in winter uniforms, only one of the girls shows off her arms: the young lady from the warm southern island of Okinawa. Hokkaido, on the other hand, is so bundled up we can only see part of the girl’s face. Girls from Osaka and Kobe also appear to be well-covered, while the schoolgirl from Fukushima pairs a short skirt with some racy, thigh-high socks. Could this really be reality?

We’ll have to keep our eyes open on our next trip around Japan to see if some of these young ladies really do exist in real life. Do you think they’re a perfect representation of their area? Let us know in the comments section below!