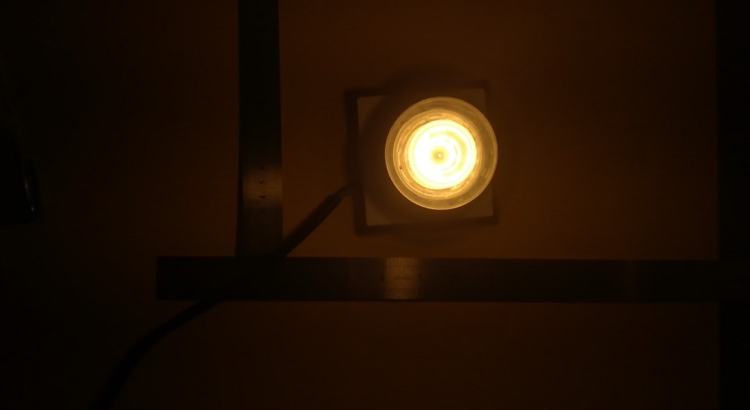 LED bulb is good,they are instant-on, free of mercury, the toxicity of rare earths is so low. It is sure they will die in one day, what point does the lamp die? Will it go with a flash? Will it still be usable for its intended purpose until the last second, or will there are be a point at which it the light has become so faint that you decide to replace it?

No body can defines the point of failure. Let us chill.

At First, we must talk about the price. It is so surprise that the price of  type LED bulb selling in China location is the highest from the below chart, and you know all the IKEA bulbs are MADE IN CHINA!  Just like other’s product: IPhone, etc. It is sad for me!

Many package looks like the same, no something special.

It is a nice warm white, stated as 2700 K on the package, also the color rendering looks great.

Here is the rating table for your reference, the CRI is so amazing, better than many LED bulbs in the market.

In different location, the article number seem different, and some of you may notice that where is the requirement of Light biological safety?  Why?  Is it trick? You can find that Light Biological Safety Statement on the package of IKEA RYET 600 lm(Read more).

Note that LED sources exhibit variation across all the flicker waveform attributes, exceeding the ranges exhibited by conventional lighting. Some LED sources produce little to no discernible flicker, while others exhibit large variation in amplitude and shape. Flicker characteristics do not appear to correlate well with any LED source characteristics (e.g., product type, driver type, or input power). Flicker frequency is not captured by the existing flicker metrics, even though flicker may be less noticeable when the modulation is at a higher frequency.

The flicker characteristics seen in some products pose a concern for anyone responsible for human health, well-being, or performance in spaces with electric lighting.

For users, we may do not care this issue, but the industry really care, this is key issue for designer and other applications. But it has long way to go, for now there is no good answer.

I perform the Input test to verify the rating, and note my equipment with calibration.

From some standards, like UL 1993 Clause 8.2, SA 8.2, With the LED lamp energized at its rated supply voltage  and at rated frequency, the device is allowed to operate for at least 30 mins before the input current and power are measured, the measured current and power do not exceed 110% of  the rating, and the calculated power factor is not less than the rating.

It will kill lots of LED bulbs Sale in China. It is true. But the IEC 62560 does not have this requirement.

30 mins later, finished test with power meter.  Compare to the rating and input test, it is really great, no lie to user. I do not test the lighting parameter, as the cost is to high for me.

Here is the table:

Because LED lighting systems don’t radiate heat the way an incandescent or halogen light bulb does, the heat produced from the power going into the product must be drawn away from the LEDs. This is usually done with a heat sink, which is a passive device that absorbs the heat produced and dissipates it into the surrounding environment. This keeps LEDs from overheating and burning out. Thermal management is probably the most important factor in the successful performance of an LED product over its lifetime because the higher the temperature at which the LEDs are operated, the more quickly the light will degrade, color shift and the shorter the useful life will be.

Regardless of the heat sink design, all LED products  properly manage the heat so that the light output is properly maintained through the end of its rated life.

From the thermal test, it is hot LED bulb, you can see the housing reach 77C and lens  85C at 28 C ambient temperature , the components inside the housing may more then 90 C, or even 100 C. It is disaster to the E-cap.  It will shorter the LED bulb life span in the long term use.

Part 5 What is it inside?

Yes, the life is up to it construction. We are going to open this IKEA Ledare LED bulb.

It is classify as omnidimensional LED bulb from the shape. I am interested to see  what the position of the LEDs would be like within the LED bulb.

It is easy to remove the globe cover by tool, the nice lens is coming in front of me. What is this use for? The lens is snap in the heatsink which is wrapped by plastic. Once the lens comes off, LED module is there. 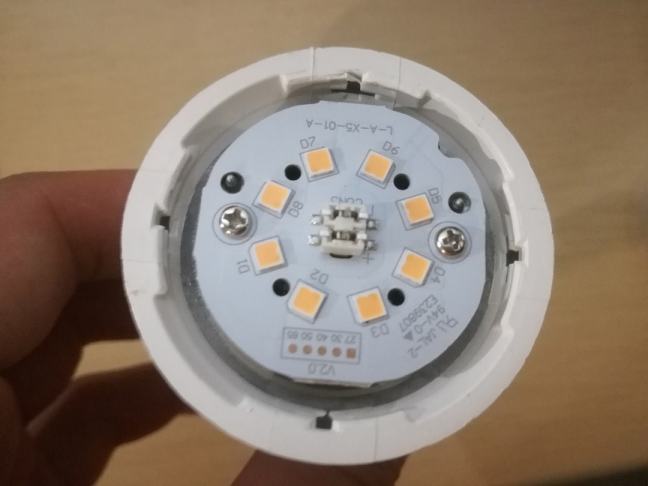 The RU is one of UL company’s symbols and  is a Recognise Component. 94 v-0 is material Combustibility rating. E239807  is file number, which you can search on the UL database, and find the metal base board supplier (QUANZHOU JINTIAN ELECTRON CIRCUIT BOARD CO LTD), model no. is  JAL-2 . 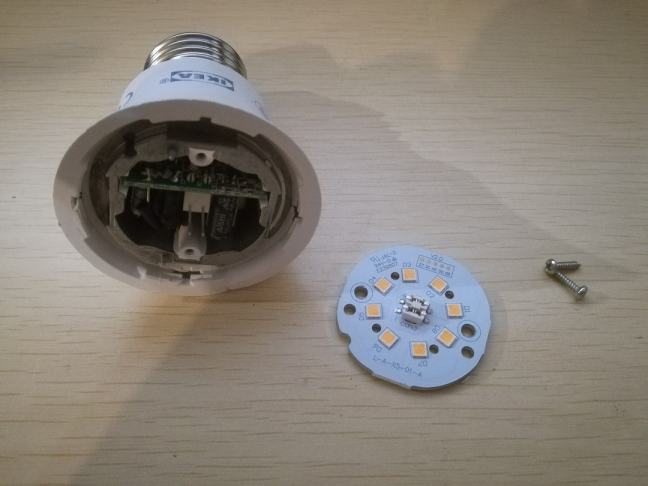 Remove the 2 screws, with a bit force, the metal LED PCB comes off the heatsink. . There is no thermal grease on the back side . Why??

Same as  many LED bulb,  this LED bulb is also constructed with metal base plastic-enshrouded metal base. Why? Possibly to protect user from the high operating temperature, share and electric shock. But thermal management is nerve-racking.

We can see the LED driver underneath the LED PCB.Next, let us dig  into the base itself. It is not easy as ABC. 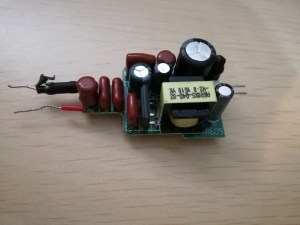 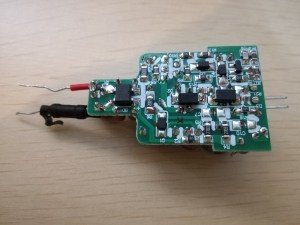 Lots of caps, an inline fuse resistor, transformer, inductor, and a few SMD transistors, caps. Some are metalized polyester film capacitiors.  You can see the bridge recifier and diodes on the the rear side of the LED driver. 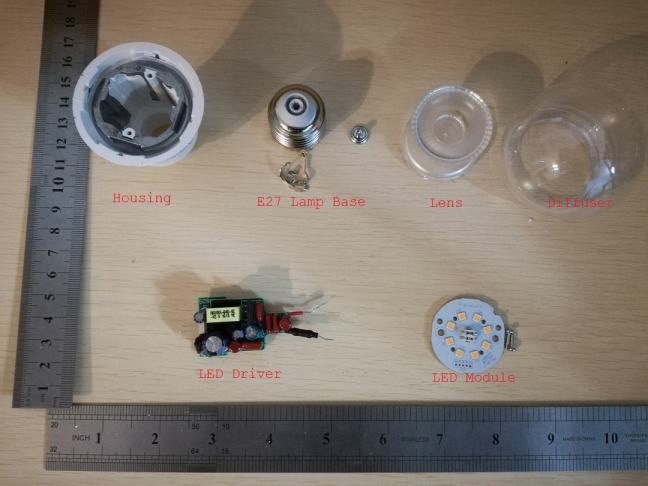 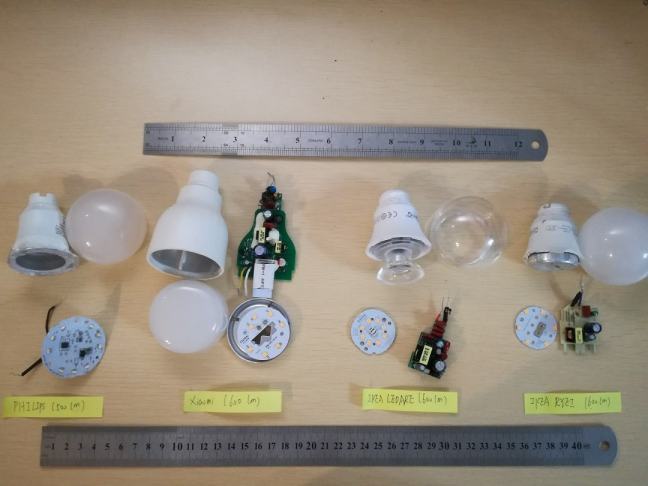 When I was young, my mother said the kid who lived us is better than me. Em, that is annoying. Now we go to this on the LED bulbs.

Now, compare to other brands,  we can make a good choice, make a better life.

From the above picture, more components, more cost, right? so which one the most expensive?

In my location, the  60 W Incandescent Light bulb is 3 RMB only.

This IKEA Ledare is 49 RMB, if you read post of  the Xiaomi Wifi White Light Tear Down, I am guaranteed that you would like to pay more than 10 RMB. The Xiaomi Yeelight is a good option. Read more :

Please inogre the damage on the top of Xiaomi LED Driver PCB. I think you have your own answer. 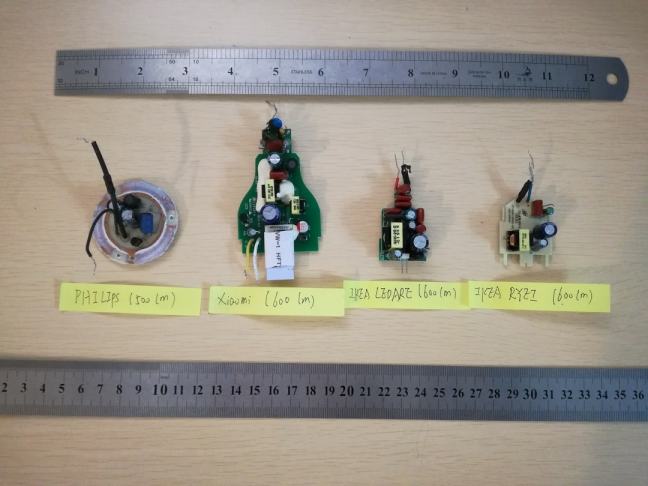 Would you want to buy this  IKEA Ledare 600 LM LED bulb?